Floating solar headlines have been swirling around the industry particularly in the last year as a favorable and financially-sound alternative to ground-mounted solar. The floatovoltaics market is considered to be one of the most high-potential levers in accelerating the transition towards a solar-driven future.  At the end of 2018, World Bank reported a total global capacity of 1.1 GW of floating solar PV. Although the global solar market has woken up to the idea of placing solar arrays on underutilized bodies of water to buoy growth in the solar energy sector,  Asia is currently still leading the wave of floating solar. To take better stock of the capacities and locations of these projects, and prepare for Solar Asset Management Asia 2019, we have compiled and analyzed the Top 100 Floating Solar PV Plants in the world. Although our overview represents global projects, in this article we primarily focus on Asia- and Japan specifically - for reasons explained in this article. We have also added some insights regarding key considerations affecting the performance of such projects and the overall benefits associated with floating solar.

Where Are These Projects Located?

The cumulative capacity of the top 100 floating projects reaches over 246 MW, more than 50% of which is located in Japan. As shown in figure 1, in addition to Japan, other hot markets dominating the world of floating solar are China, South Korea, the United Kingdom and Taiwan. Considering this overview, the total capacity installed in the aforementioned countries stands at 244.6 MW, which is almost 99% of the capacity of the complete list altogether. The majority of the projects featured in this overview are placed on reservoirs.

Delving deeper into these five key markets (figure 2), the available data illustrates that the capacity of floating solar in China adds up to more than half of Japan’s. However, the difference in the number of projects based in China vs. Japan is not as striking. In a similar vein, South Korea harbors twice as many plants as China, but only 28% of China’s total capacity. This does not come as a surprise as Anui in China holds the two biggest floating solar plants in the world, with a cumulative capacity of 60 MW. However, these two projects will no longer lead the pack, when the 102.5-MW project in South Korea  becomes  operational, which is expected to happen in 2020. 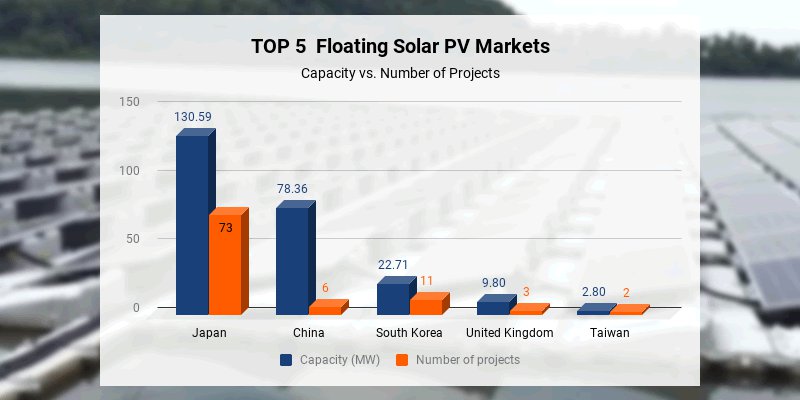 Floatovoltaics Making a Splash in Japan

73 of the 100 largest floating projects are based in Japan, which account for more than 50% of the total capacity of this list, as stated earlier. Zooming into the Japanese market, more than 43% of the top 100 floating solar projects are located in Hyogo. One reason for that can be linked to the fact that Hyogo is home to more than 37,759 agricultural reservoirs and that the region is actively pursuing different ways to generate renewable energy. Kagawa is the region with the second largest capacity, when looking at the top projects situated in the country. The interactive map above presents Japan’s top 10 floating projects, the remaining 63 can be found in the complete overview. The most important project is the 13.7-MW Yamakura solar plant, which became operational in March 2018 and marks the country’s largest floating solar project to date.On the other side of the spectrum, located in the region of Aichi, Aisai City is the smallest Japanese plant with 460 kW of floating solar PV capacity. Regarding the floating system providers, the most important, based on the number of systems installed, are shown in figure 3, the most prominent of which is the company behind Hydrelio floating solar technology, the France-based Ciel & Terre. 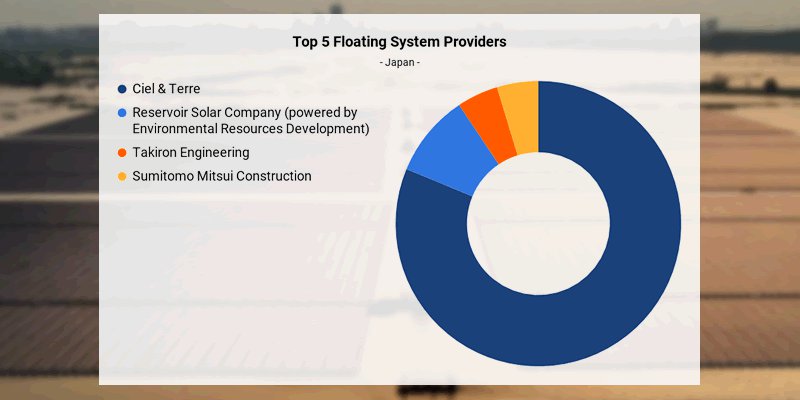 Setting solar to sail comes with a myriad of benefits, some of which include:

Starting with what sets floatovoltaics apart in terms of design features: in ground-mounted solar systems diggers are required to drive the poles into the ground, for which some use concrete solutions. However, floating solar does not necessitate any of that. The arrays simply clip together and are then pushed out onto the water. One foundational aspect not to compromise upon is the anchoring system, which helps to keep the pontoon in a static position. The deeper the body of water, the higher the CAPEX will be. With respect to inverter type, either centralized or string inverters can be deployed. Additionally, the DC & AC cables should have impeccable weatherproofing properties and can either be regular cables, lifted by buoys, or be submerged in some type of waterproof conduit.

The design of such projects also needs to be able to withstand the biggest expected load cases caused by severe hurricanes and typhoons. Otherwise, like in the case of Osaka Sayama in 2017, the float could be distorted, leaving the solar panels damaged (see figure 4). Another point of concern is the reduced production resulted from micro-cracks on the panels due to lack of stability in the system design. Last but by no means least important, the material used in the floating system should be completely non-toxic, as well as resistant to salt water, when placed on the surface of the sea.

Regarding the maintenance of these type of projects, the most crucial differences evidently boil down to the floating aspect, in other words, water. The humidity and temperature of the water should be monitored as they can have an adverse impact on the production of the plant. The evaporation of moisture from the water surface creates a fog, resulting in a reduction in the amount of light entering the solar cells, which therefore leads to a lower system output.  Another concern is that the hot climate of water attracts animals and plants, leading to them gathering beneath and above the pontoon.

Join the 5th edition of Solar Asset Management Asia, taking place in Tokyo on May 30 & 31 2019, where among other topics the experts will demystify output, efficiency and degradation of floating systems, and dive deep into assessing the risk-reward profile of floating solar in Japan.

Dedicated to optimization of the operational phase of solar assets, the Solar Asset Management conferences create a unique convergence of opportunities to network, learn and share knowledge, representing industry views across the entire asset management and O&M spectrum.

Register now, it is never too early or too late to start optimizing your assets!

Disclaimer: This overview is provided by Solarplaza International BV ("Solarplaza") as a service to its customers on an "as-is, as-available" basis for informational purposes only. Solarplaza assumes no responsibility for any errors or omissions in these materials. Solarplaza makes no commitment to update the information contained herein.

This overview is protected by copyright laws, and may only be reproduced, republished, distributed, transmitted, displayed, broadcast or otherwise exploited in any manner only by accrediting Solarplaza as the source of it and providing a full hyperlink to www.solarassetmanagement.asia where it was originally published.