Top 50 Solar Plants in Asia: The lands of rising solar

When it comes to solar power, China is a force to be reckoned with. It is not nearly as immediately apparent that other countries in Asia are also blooming with solar power. Given the recent commitments at COP21 and ASEAN Ministerial summits, positive investment climate and huge hunger for power, Asia has witnessed the commissioning of an abundance of utility-scale solar plants. In an effort to show the strength of solar power in the region, we've compiled a list of the Top 50 largest Asian PV plants. This list of solar PV plants comes in preparation of the 2-day conference, Unlocking Solar Capital Asia set to be held in Singapore on the 28-29th of September. 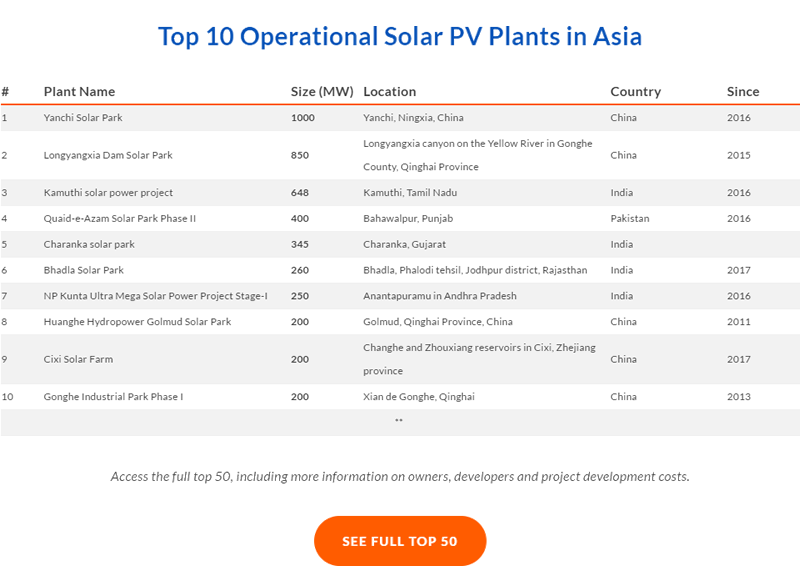 Leaders of the pack

The most prominent large-scale solar developer of China, United Photovoltaics, accounts for 515 MW of solar energy alone. The company, formerly known as Gold Poly Energy Holdings, developed and owns 6 of the 50 solar parks to date. Another solar giant in the region is Xinyi Solar Holdings which fully owns or has partial ownership in several solar plants across the country. Besides United Photovoltaics, Huawei represents a prominent company in terms of supplying modules and inverters for several of the listed power plants.

India’s position as the country with second most installed solar capacity would have been significantly different a couple years ago. Only 3 out of its 11 Top 50 solar PV plants were commissioned earlier than the year 2016. Another sign of India’s increased focus on solar PV comes from the fact that another 3 of its plants were commissioned just this year. However, India is not only interesting because of its newly established power plants; the country is also home to Asia’s largest conglomerate of separately developed solar plants. The Charanka solar park consists of PV plants developed by 17 different developers and is part of a larger initiative in Gujarat to produce over a gigawatt of energy across the city.

In order to give a more focused view on the Southeast Asian region - without the overshadowing effect of India and China - we compiled a ranking of the 10 largest Southeast Asian projects. Although the list provides a clearer picture of the region’s largest solar farms, it emphasizes the Thai and the Philippine regional dominance. 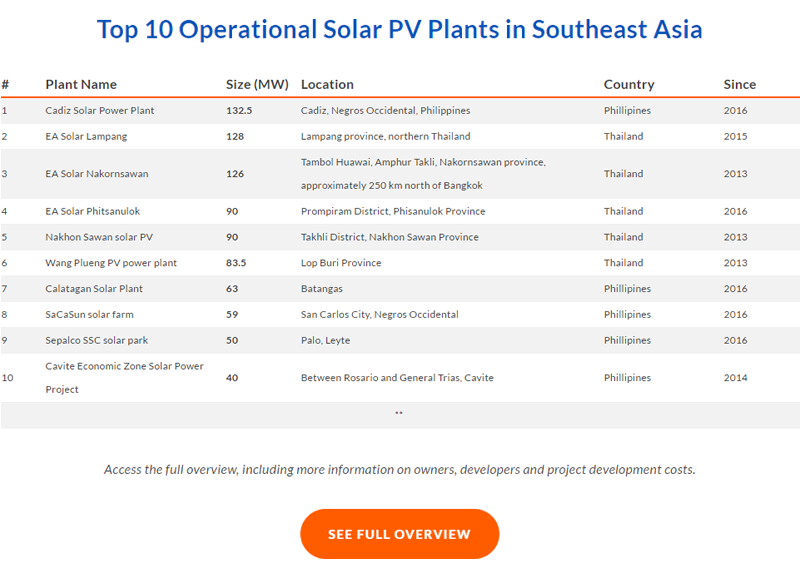 Thailand and the Philippines have made tremendous progress in the development of their local regulatory framework facilitating solar energy. Thailand, has brought online 5 of the top 50 solar plants and many smaller scale plants have also been commissioned thanks to the country’s Feed-in-Tariff (FiT) system and other tax and non-tax incentives. The majority of the large-scale solar development in the country is associated with Energy Absolute PCL. The formerly biodiesel-focused company, has brought online 4 out of 5 of largest Thai solar plants and is aspiring to be a super power in battery production as well.

The Philippines, although very much in the early phases of adopting solar energy, managed to get two positions in the list. The 63 MW solar plant in Calatagan is not only one of the nation’s largest operating solar plants but it also demonstrated the Philippine ability to carry out solar projects of such magnitude. Through the management of Solar Philippines, the commissioning of the plant marked the first time a utility-scale solar plant was developed, financed and constructed entirely through local efforts. The company, led by 22-year-old entrepreneur Leandro Leviste, is planning to continue the clean electrification of the Philippines by establishing 500 MW of solar energy until the end of the year.

An indication of the hot-spot nature of the Asian solar power is not only apparent in the sheer size of the plants but it is also striking looking at the chronological pattern of establishment. The vast majority of Top 50 plants were commissioned in the last four years and some have already commenced operation this year.

The 2-day conference and networking platform Unlocking Solar Capital Asia, taking place in Singapore, will bring together 200+ investors, financiers, solar developers, IPPs, EPCs & other solar stakeholders interested in developing bankable PV projects in the region. The event will provide both regional and country-specific overviews, while empowering delegates with excellent networking and matchmaking opportunities to couple the right projects with the right type of capital.

Looking to really dive into Southeast Asia and get your business kick-started in one of its most promising markets? Consider joining the Solar PV Trade Mission to Vietnam; the 5-day turnkey solution to explore the opportunities for your business in Vietnam (27 Nov - 1 Dec, Hanoi - Ho Chi Minh City).

Complete the form below to gain immediate access to the full Top 50 Asian and Extended Top 10 Southeast Asia plant overviews.