On 16th February 2017, Solarplaza organized the webinar “Potential Induced Degradation (PID): Mechanisms, Recognition and Mitigation”. Jenya Meydbray, Vice President of strategy  and business development at DNV GL, and Adrián Ramos, Senior Business Developer at OMRON joined the webinar as speakers and shared their expertise in mitigating the threat of potential induced degradation. The entire video recording of the webinar and the speakers’ slides can be freely accessed here.

Potential induced degradation (PID) is one of the most common threats to the performance of a solar panel, yet it is also frequently neglected by inexperienced developers.

From a physics perspective, PID stems from the voltage differential between the module frame and the photovoltaic cells near the negative pole of the module that uses a transformerless inverter. This voltage differential can become strong enough to cause the migration of positive sodium ions from the glass to the cell itself, thus ingressing and degrading its performance.

Despite the simple physics behind PID, Jenya notes that it is startlingly common among developers. He presents the following chart, plotting the degradation rate per year of 1,200+ projects. The median is 0.5% degradation per year, the average is 0.8%, but there is a long tail of projects whose degradation rates are much worse.

Overall, 10% of projects have a degradation rate of 1.3% or more, which is very troubling. According to Jenya, the chief culprit behind this worrying trend is equipment quality oversight. 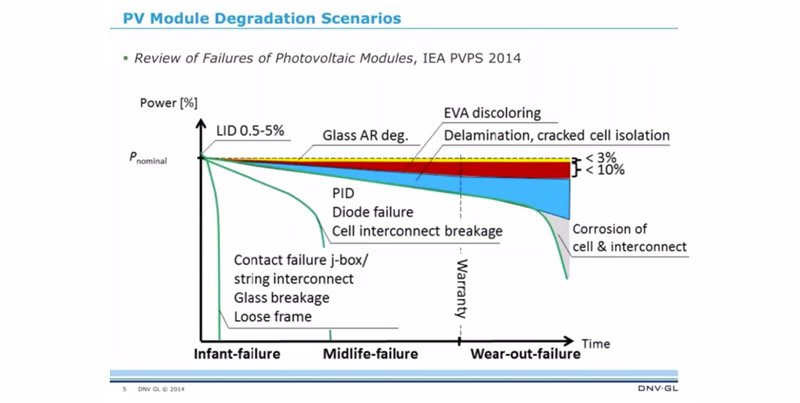 Jenya shows another chart, which plots the degradation caused by different phenomena at the different stages of a photovoltaic module’s life. PID is shown as the main cause of midlife failure.

Adrian points out that the severity of PID rises exponentially over time, which necessitates rapid response after detection. When caught early, PID is usually reversible.

Adrian also notes the prevalence of PID in Europe; unlike in the US, transformerless inverters are very common across the European continent, which has compromised the integrity of numerous solar projects over the past decade.

Another reason for the pervasiveness of PID  is the difficulty of making accurate predictions for photovoltaic modules. Often times these modules come with a 25-year service life, but since 85% of the world’s deployed PV capacity has been installed less than 5 years ago, the long-term performance of today’s technology, although studied and modeled extensively, has never been witnessed in practice.

All components of a solar plant should undergo rigorous practical testing, including the photovoltaic modules, the inverters and the energy storage. Firms like DNV GL strive to test as many manufacturers as they can, which allows them to offer their reports to downstream partners (developers and banks) at no cost.

There are three steps to the testing process. The first one is to individually test components based on their bill of materials. It is worth noting that components can have the same model number, but a different bill of materials. A common error is to test per model number instead of bill of rights, which can scramble testing results significantly and render them useless.

The next step is batch testing, which involves sampling a statistically significant number of components. At this point, the question is no longer whether the manufacturer can produce a high quality component, but whether he can maintain this level of quality over a long production run.

The final stage is field testing, which is essentially a verification process to confirm the results of the previous stages in practice. The most common technique here is thermal imaging from a drone or airplane, since PID cannot be detected with the naked eye.

DNV GL and similar firms are among the first line of defence for developers against PID. More and more focus is being put on combating this problem, since a recent study funded by the European Commission revealed just how detrimental PID can be.

According to the report published on 15th February 2017, PID has an average economic impact of €0.12 per Wp over the entire solar portfolio. This makes it the third most expensive technical risk, just behind improper installation procedures and glass breakage.

Overall, PID is a technical risk that can be entirely prevented with proper diligence. Considering its immense impact on the profitability of a solar portfolio, PID identification and mitigation should be among the foremost thoughts in every developer’s mind.

Learn more about PID and other in-depth topics related to solar operations and maintenance and solar asset management at the 4th edition of Solar Asset Management North America (28-29 March 2017, San Francisco), the leading event focused on the operational phase of solar plants and portfolios.