Who will fund Iran's first batch of renewable energy projects?

Ever since the Renewable Energy Organization of Iran (SUNA) launched the feed-in-tariff program last May, foreign project developers have been keeping a close eye on the market. Many have already signed power purchase agreements with SUNA and are now arranging sites and setting up joint ventures with local developers.

“A lot of developers are buying up sites with a view that Iran will open up and it will become easier to do business there”, says Indraj Mangat, partner at international law firm Eversheds and head of the Clean Energy Group's global project-finance team.

However, the first group of projects will likely be 100% equity financed, according to Clint Dempsey, principal associate at Eversheds and head of the firm’s UAE banking and finance team. “International banks are very hesitant about coming into the Iranian market because of the uncertainties over how the various sanctions regimes will play out,” he says.

UN sanctions against Iran could kick back in if Iran doesn’t comply with its obligations under the nuclear deal. Should this happen, commercial banks that have advanced loans into the country may struggle to recover their loan repayments.

“Financing is one of the challenges in Iran. Essentially there is limited financing available and local banks have limited experience in terms of project finance.”

“Financing is one of the challenges in Iran. Essentially there is limited financing available and local banks have limited experience in terms of project finance. On the international side, whilst a number of banks said they were interested, there’s been limited engagement so far,” Jean-Pascal Boutin, partner at Eversheds and head of the energy regulatory team.

About a dozen international banks, mostly European, were fined billions of dollars for doing business in Iran over the last few years and are understandably reluctant to rush into the market and risk their assets and debts.

Last month, French environment and energy minister Segolene Royal described the refusal of major French banks to work in Iran as “completely unacceptable”, stressing that she would urgently look for an alternative, even if it meant looking outside France.

"We will find a solution. Either we will work with non-French banks... or we will mobilise the public investment bank, or why not the European Investment Bank?" she was cited as saying by AFP.

“In reality, Iran’s renewable energy market is in a wait-and-see mode, with three macroeconomic events to soon determine how the global business community undertakes business with the country.”

In reality, Iran’s renewable energy market is in a wait-and-see mode, with three macroeconomic events to soon determine how the global business community undertakes business with the country.

Firstly, the US presidential elections and whether the hostility between the US and Iran will continue. Secondly, the Boeing deal which is going for congress and whether the aerospace company can get its license to enter the Iranian market by spring of 2017.

And thirdly, Iran’s presidential elections in May 2017. “It depends on which candidate gets in, this could have a serious impact on Iran doing business with the international community,” suggests Dempsey.

Despite the current challenges in the market, Iran has attracted a handful of developers and financiers from across Asia and Europe, especially China and Italy.

“In the near-term, more developers and financiers are expected to venture into the market when the returns and equity in projects live up to the risk associated with the country.”

According to SACE estimates, the end of the sanctions might bring an increase in Italian exports to Iran of almost €3 billion ($3.37bn) by 2018. 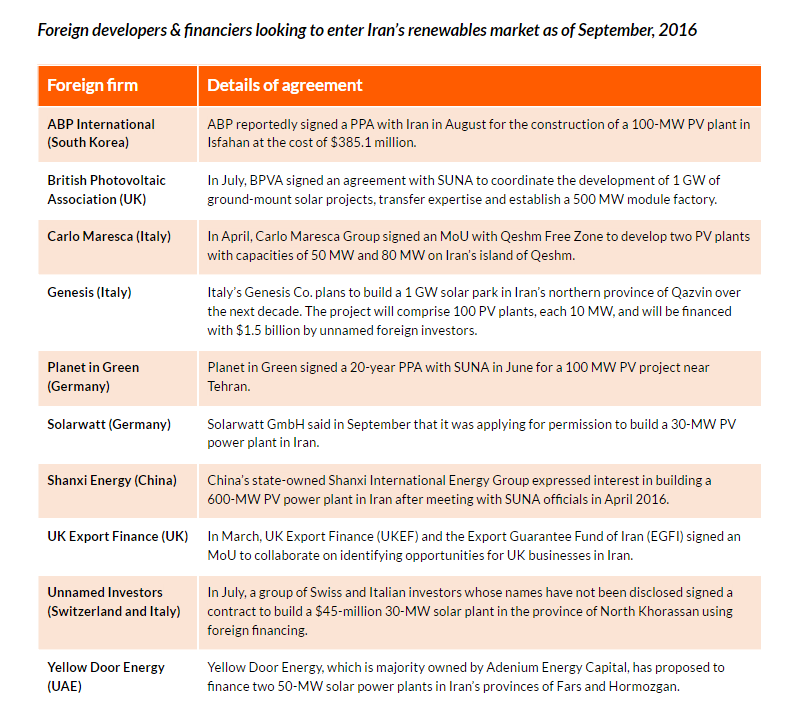 China and Iran are already cooperating on several large-scale projects, including the construction of an oil terminal in the Persian Gulf, and have agreed to increase bilateral trade to about $600 billion over the next 10 years.

Most recently, the state-owned Export-Import Bank of China signed a memorandum of understanding with Iran to pave the way for the financing of economic and infrastructural projects, including transportation, power plants, oil and gas, industrial parks, and tourism. Under the deal, the Chinese side will finance governmental and private-sector projects in Iran through low-interest loans with long-term payback periods.

In the near-term, more developers and financiers are expected to venture into the market when the returns and equity in projects live up to the risk associated with the country.

“It’s just a matter of time. Someone needs to test the waters.”

Mangat and Dempsey suggest that returns on Iran’s renewable projects could easily be in the high teens because of the risk involved – particularly for equity investments.

“We are hearing there are movements by export credit agencies in the UK and Europe, and a few of the Chinese banks might enter market,” says Mangat. “It’s just a matter of time. Someone needs to test the waters.”

Meet with the most relevant players and experts of Iran’s RE market in our upcoming renewable energy trade mission to Iran, with speakers confirmed from Central Bank of Iran, SUNA and OIETAI, the PPA its bankability and RE investments can be discussed in-depth with the decision makers on Iranian side.